Mittermaier stands for sophisticated solutions in the fields of design, prototype production, fixture and special machine construction, parts production or assembly. Since the company was founded, owner Erich Mittermaier has sworn by HURCO systems for solving his complex tasks; the WinMax control system creates even more precise and faster processing of orders – and more cost savings. 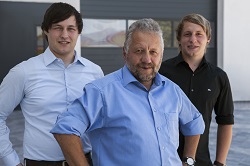 The family business based in Bergen in the Chiemgau region had already made a name for itself as a design office and specialist for individual parts requiring complex production until owner Erich Mittermaier moved into mechanical production in 2004. In the meantime, 24 people work at Mittermaier GmbH, with sons Christian and Stephan supporting the founder in the management. 80 percent of the employees were trained here according to the principle of “precision with passion”.

Mittermaier is also valued for its consulting expertise, which helps customers save money. This is because the professionals from Bavaria often recognize at first glance which unnecessary details make prototypes more expensive. “When producing a sample, we have aspects of series production in mind, but we don’t implement them in the prototype so as not to make this individual piece more expensive,” says Christian Mittermaier. The strength of the family-owned company lies in the duality of service- and cost-oriented support as early as the design stage and the highest precision in production. Mittermaier relies on its extensive machine park, which is exclusively equipped with HURCO machining centers – ten in total, three of which are 5-axis centers. “The HURCO machines offer us the advantage that we have the same control system everywhere and can thus produce fixture parts and molded parts more economically. After six, at the latest seven years, a HURCO has paid for itself with us,” the managing director calculates.

This means that even the most complex parts can be manufactured efficiently and in high quality, and in a wide variety of materials such as metal, plastic, ceramics or even wood. At Mittermaier, they like to come up with complicated special solutions: “The requirements are becoming more and more complex, such as for integral parts in the aircraft or automotive sectors,” says junior manager Christian Mittermaier. These challenges are mastered with state-of-the-art production technology. “With our machinery, we can now process orders that would have been so unthinkable just a few years ago.” At the heart of the single-part finisher here is the WinMax control from HURCO with the Ultimotion feature.

The entire machining center achieves exactly the accuracy, speed and reliability that Mittermaier stands for.Erich Mittermaier found the leap from the first 3-axis to the 5-axis machine unproblematic; he estimates the effort for his operators at around one day of training. The entire team swears by the 3D graphics with real-time simulation: “Our business is increasingly based on the use of the Hurco machines for machining free-form surfaces up to 5-axis simultaneous machining; with the HURCO machines, our production time has been reduced by at least 50 percent since 2005 thanks to modern milling technologies, innovative cutting tools and software updates.”

Because the company is also always up to date when it comes to software, the versatility of HURCO’s products and the ease with which they can be changed over to new versions are highly rated. “The developers have gone the extra mile to ensure that WinMax has retained the clear user interface and that UltiMax and WinMax have thus remained almost the same in terms of operation,” says Christian Mittermaier. “He finds the new control system “unbeatable” in terms of speed, flexibility, and intuitive operation, and that the operator now does the main work via the touchscreen monitor. Erich Mittermaier adds: “The Ultimotion software option is only available with the WinMax, but the WinMax control system can still be used with older machines. For example, we have retrofitted our VMX 50S from 2006 with WinMax and thus have the current software version with the current CPU in the system.”

Most parts are programmed directly on the machine, otherwise via the CAM program at the programming station using the CAD model and then the NC program is placed on the machine via the network and produced. “The WinMax interface for CAD/CAM works great,” says the senior manager, “it’s a staple for us in our daily work.” He quickly came to appreciate the Ultimotion feature, which provides time-saving motion sequences and a smoother production flow, especially for parts requiring machining of complex free-form surfaces. Erich Mittermaier: “Depending on the complexity of the workpieces, this even adds up to hours, which in the best case results in up to 50 percent runtime savings, especially in trochoidal milling with numerous retraction and infeed movements, where milling tools are precisely without cutting intervention and these amount to up to 50 percent of the total tool paths per component.”

His son Christian adds, “The ingenious thing is that the daily setting of the machine remains absolutely the same. Once set up, Ultimotion works in the background.” To save time, he transfers the programs of the individual clamps to other machines in a hurry – this way, he produces a batch of prototypes quickly and without any necessary adjustment to the control system. In this case, the technological uniformity in handling is a huge advantage: “Every operator can handle the programs, approach zero points and check the sequence. Ultimotion also ensures greater safety and precision thanks to the improved running smoothness of the systems. Flowing sequences reduce vibrations that are transmitted to the tool and workpiece – less vibration means longer tool life, better surfaces and less wear on the machine’s mechanical transmission elements.”

The service-friendliness of HURCO systems saves Erich Mittermaier time and money: “We rely on the factory settings, which are checked by the HURCO service crew right away when a new machine is purchased. HURCO service knows the controls in their sleep and the technology as well. The uniform technology with the same components as well as the intuitive controls result in a rock-solid and user-oriented product. If we have any questions, a service representative from HURCO comes by. In doing so, he imparts a great deal of knowledge to us every time and helps us to execute the applications optimally and economically.” This enables Mittermaier GmbH & Co. KG is able to hold its own in a complicated and demanding market whose constantly growing demands are met by the Mittermaier crew with know-how, a passion for precision and state-of-the-art machinery from HURCO.