Programming on 5-axis machines from HURCO can be performed easily and quickly. New and less specially-trained employees can be trained in a short period of time.

The programming time is reduced and simplified through simple data importing in the STEP 3D model format. The import option interprets the data and makes production programming directly at the machine possible. The path from workpiece to component becomes more secure as well. The potential for error during programming is reduced many times over, partly because the machining simulation of the written program is shown together with the solid model in a single view. Thus, users can immediately see if the programming matches the finished component and can refinish this component if necessary. 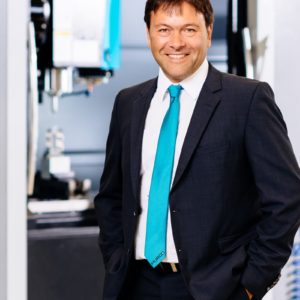 HURCO machines are equipped with the intuitively operable “Max5” conversational control system. “Our control system is an absolute highlight and unique feature of ours”, Michael Auer, Managing Director of HURCO GmbH, emphasizes. “It is the fastest in the industry and vastly increases the machine’s efficiency.” DXF files can be directly imported into the CNC control system. Drawings or sketches are imported quickly into a finished program, which contributes to increased profitability in prototype, single piece and small series production.